In 2020, doctoral representatives in Bavaria started exchanging ideas on matters concerning doctoral candidates and on how to build representative structures across the state. Since then, a network of universities with regular meetings was established: the Landesnetzwerk der Promovierendenvertretungen in Bayern, with members from the universities in Bayreuth, Erlangen-Nuremberg, Munich (TU), Regensburg and Würzburg.

In this position paper presented to the Ministry of Science and Art, LaProBay focuses on the doctoral-related topics of the Bavarian Higher Education Act. LaProBay calls for:
1. legal anchoring of the doctoral representations and their inclusion into the existing status groups.
2. promotion of young researchers and plannable career paths
3. participation of doctoral candidates in the development of rules on teaching load
4. framework conditions for doctorates at or in cooperation with universities of applied sciences (HAWs)

Since the Bavarian Ministry of Science and Arts published the key points of the planned reform of the Bavarian Higher Education Act in October 2020, a broad and constructive discussion about the future direction of the Bavarian higher education landscape has flared up. In this discussion, the perception of the next generation of scientists, who are currently in training, is unfortunately only taken into account to a limited extent. At the Technical University of Munich, for example, this generation forms the largest group with approximately 45,000 students and approximately 7,000 doctoral candidates, who share similar ideas for an innovative Bavarian university landscape.

For this reason, the Student Council and the Graduate Council have dealt intensively with this issue and jointly drafted a position paper outlining their vision for the future development of the Technical University of Munich. The contents were developed by working groups, discussed in regular meetings of the representative bodies, and finally passed in parliamentary processes as a position paper by the Student Council and the Graduate Council.

The nine-page paper is not to be understood as a pure critique of the published key points on the reform of the Bavarian Law for Higher Education. Rather, it is intended to express the requirements of the next generation of scientists regarding this reform and to serve as an invitation to a constructive dialogue.

Our society is formed by individuals with a vast range of backgrounds, intersectional histories and lived experiences. The TUM Graduate Council welcomes internationality and diversity at the Technical University of Munich, and is dedicated to ensure that all doctoral candidates are in a safe, supportive, inclusive and open-minded environment.
Therefore, the TUM Graduate Council supports the efforts to increase gender balance and equality; to implement diversity boards at school and university level; and to provide a family-friendly environment through childcare facilities. In addition to this, we demand to expand assistance on burocratic matters to the incoming doctoral candidates.
Finally, the TUM Graduate Council opposes to any form of discrimination and proposes the creation and expansion of workshops related to intercultural education and anti-racism, as well as to intersectionality and diversity.

Hence, the Graduate Council has already introduced measures to incentivize active participation at its meetings and in its working groups, such as an official certificate over the voluntary involvement of its members as well as events like the annual summer festival and the Graduate Council retreat in Raitenhaslach.

Today’s doctoral candidates are the potential academic mid-level employees of tomorrow. However, due to a significant wage gap compared to jobs in the private sector and the prevalence of short-term contracts without further perspectives in academia, mid-level positions are currently less attractive for promising candidates.

As a core concept of the next Excellence Initiative at TUM, the program CareerDesign@TUM will offer employees at the academic mid-level opportunities to continue their career in designated expert tracks. The program outlines academic careers at TUM aside from a professorship and supports employees who want to focus on their strengths, be it in science management, teaching or research.

In our position on academic career paths, the TUM Graduate Council welcomes this initiative and suggests further measures to improve the situation for current as well as future employees at the academic mid-level. Our propositions include a compulsory leadership training for executive members of TUM as well as the expansion of childcare and other complementary services. Furthermore, we demand the implementation of a maximum number of doctoral candidates per supervisor as well as of scientific staff to administrative and technical employees to guarantee a high supervision quality and a fair distribution of tasks. 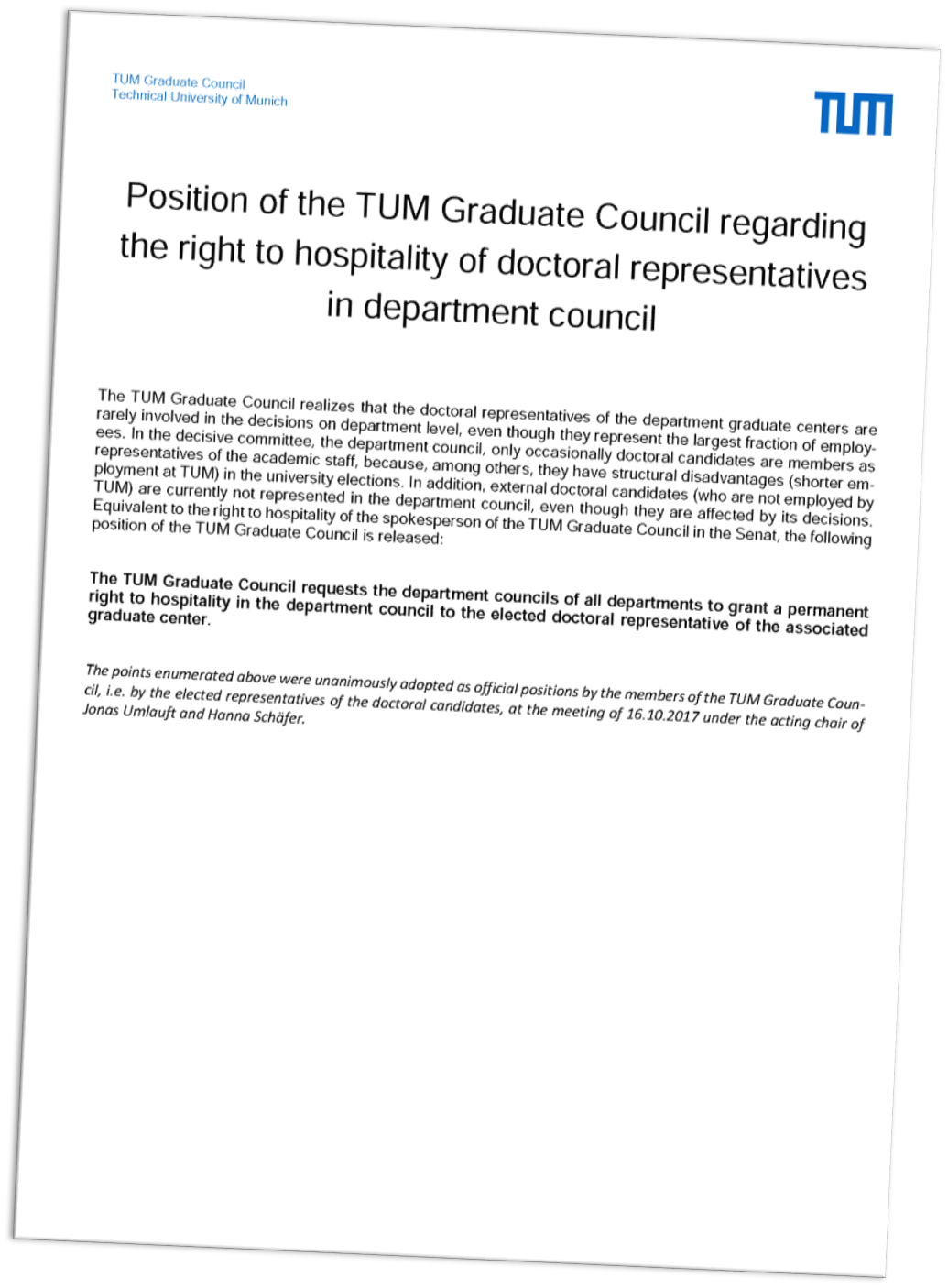 Hospitality of doctoral representatives in the department councils

Many important decisions in university politics are made on department level, particularly during the regular meetings of the department councils. Even though doctoral candidates usually represent the largest fraction of employees at the department level, they are rarely and if, only indirectly via the elected representatives of the research associates (mostly post-docs or long-term academic staff), involved in the decision-making process. In addition, external doctoral candidates, who are not employed by the Technical University of Munich (e.g. because they  hold a scholarship), are not at all represented in the department councils, even though they are directly affected by their decisions.

For this reason, the TUM Graduate Council requests all department councils to grant a permanent right of hospitality in the meetings of the department council for the elected doctoral representatives of the associated graduate center(s). 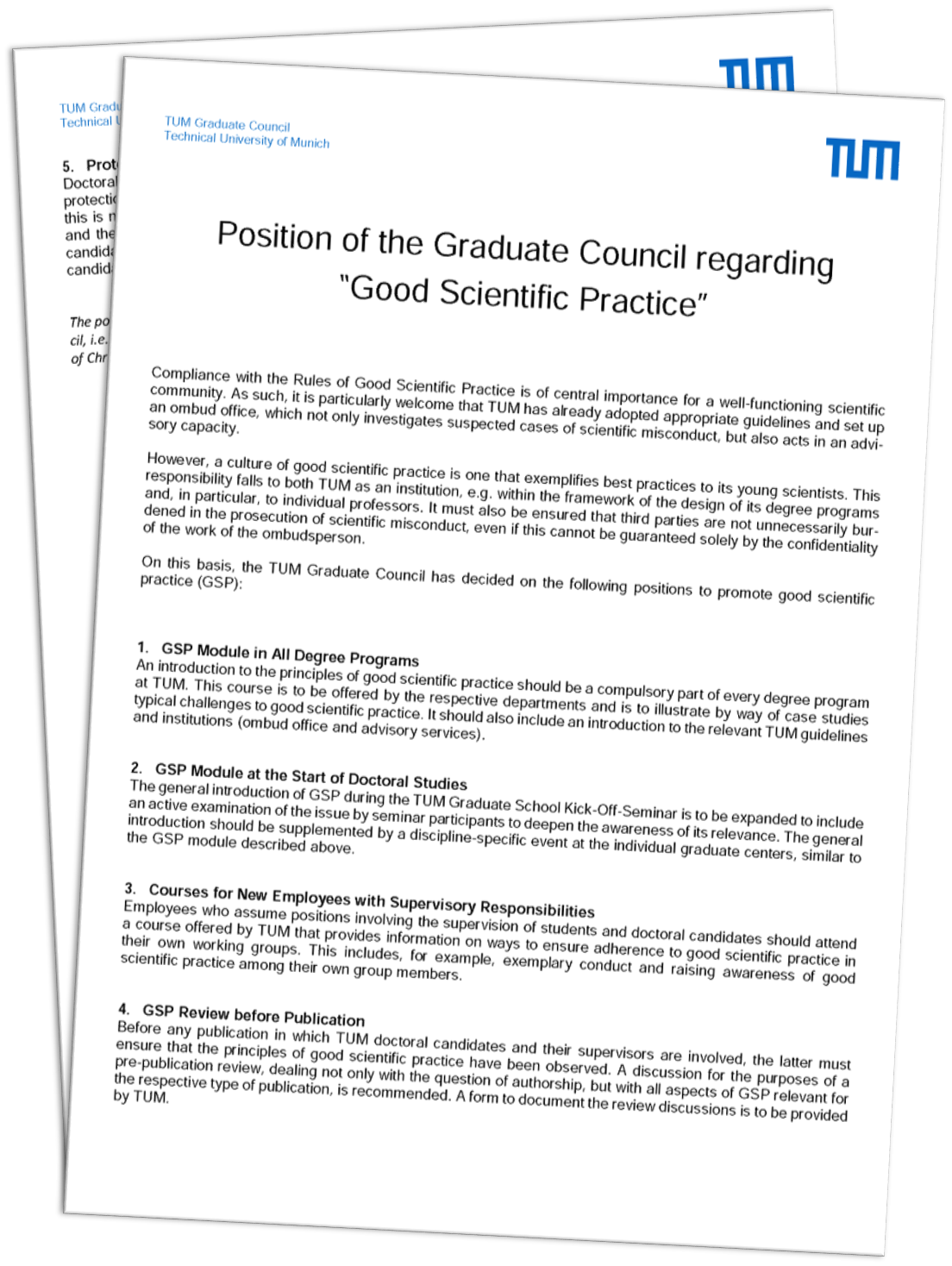 A culture of Good Scientific Practice (GSP) is central for the scientific community’s well-functioning, and young scientists should embrace it from the beginning. Therefore, the Graduate Council calls for learning modules for both students and doctoral candidates to raise awareness on GSP at early stages. Similarly, aspiring professors and employees with supervisory responsibilities should take special GSP courses to ensure that they will follow a consistently high standard in their working groups.

Furthermore, GSP should be present when preparing a publication and when choosing a publisher. In this sense, the Graduate Council calls for a pre-publication review discussion and commitment to avoid predatory journals.

Finally, the Graduate Council demands to increase protection for those affected by the scientific misconduct of others. After all, doctoral candidates should neither feel morally impelled nor fear for their own doctoral projects when informing the ombudsperson about a supervisor’s misconduct. 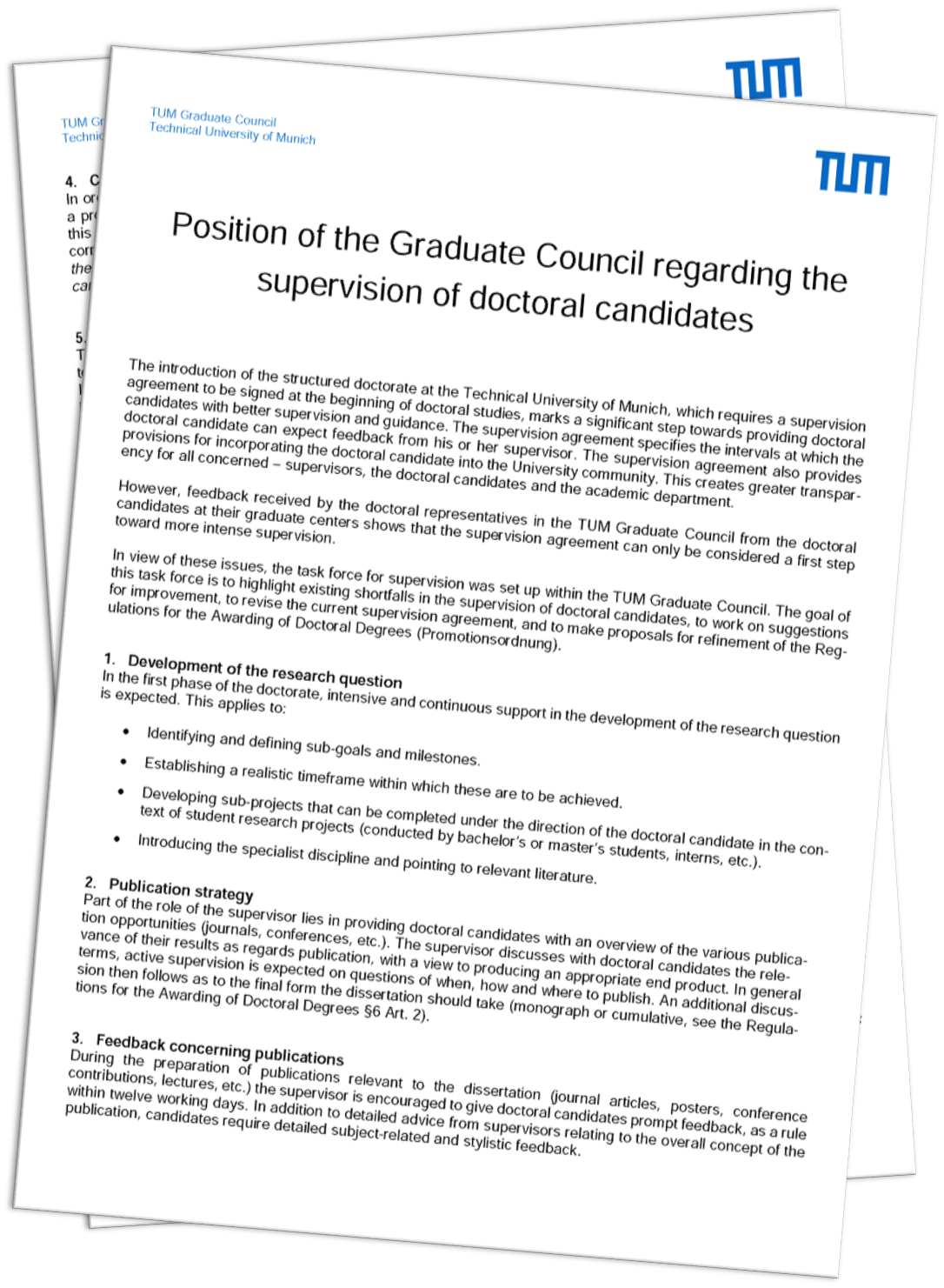 The introduction of the structured doctorate at the Technical University of Munich, which requires a supervision agreement to be signed at the beginning of the doctoral studies, marks a significant step towards providing doctoral candidates with better supervision and guidance.

However, feedback received by the doctoral representatives in the TUM Graduate Council from the doctoral candidates at their graduate centers shows that the supervision agreement can only be considered a first step towards more intense supervision.
In view of these issues, we highlight existing shortfalls in the supervision of doctoral candidates, to work on suggestions for improvement, to revise the current supervision agreement, and to make proposals for refinement of the Regulations for the Awarding of Doctoral Degrees (“Promotionsordnung”). 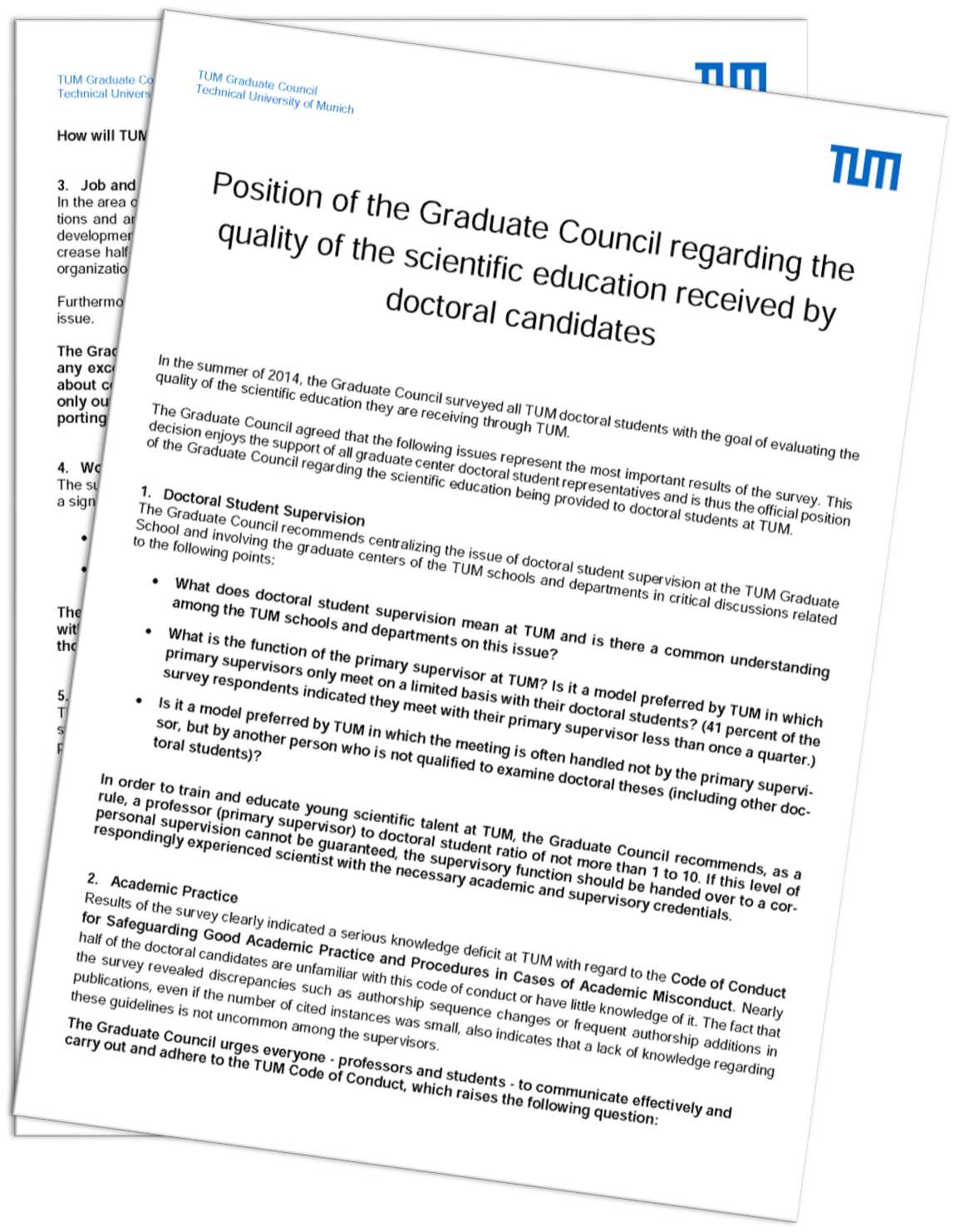 Quality of the scientific education received by doctoral candidates

In the summer of 2014, the Graduate Council surveyed all TUM doctoral students with the goal of evaluating the quality of the scientific education they are receiving through TUM.

The Graduate Council agreed that the following issues represent the most important results of the survey. This decision enjoys the support of all graduate center doctoral representatives and is thus the official position of the Graduate Council regarding the scientific education being provided to doctoral students at TUM.